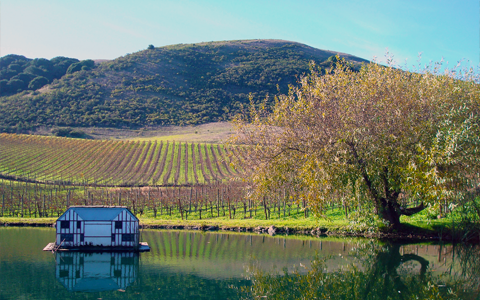 Wine Country is an area of northern California which includes Sonoma Valley, Napa Valley, and the Carneros region, about an hour north of San Francisco. These areas are known the world over for the superior wines that come from these valleys, which are just a fraction of the acreage of wine country in places like Bordeaux, France.

Sonoma Valley is a 16 thousand acre stretch of fertile land bordered by the Mayacamas Mountains on the East and the Sonoma Mountains in the West. It is perfect for wine growing with its combination of mild climate and rich, variegated soils. Sonoma Valley is able to grow several types of wine, including Pinot Noir, Cabernet, Sauvignon Blanc, Merlot, Zinfandel, Cabernet Sauvignon, Semillon, and Syrah. Sonoma Valley tends to be dry and warm, cooled in the evenings by coastal breezes that creep over the mountains. The Sonoma Valley is known not only for its top notch wines, but also for its high quality cuisine, its charming hotels, and annual festivals. Once home, to the coastal Native American tribes of the Miwok, Pomo, and Wintun, Sonoma Valley was selected by the Spanish Franciscan order of monks as the site for the Mission San Francisco Solano. Established in 1823, it was the only mission established in an independent Mexico. The town of Sonoma was founded by Gen. Mariano Guadalupe Vallejo. Sonoma has steadily gained in fame for the reliability and high quality of its wines.

The Napa Valley was inhabited by six Native American tribes, all of which warred with each other; the Mayacomos, the Callajomans, the Kymus, the Napa, the Ulcus, and the Soscol tribes all lived in the Napa Valley, but nearly all were killed off in a smallpox infection after the arrival of the Europeans. The first Anglo-Saxon immigrant to live in the area was George Calvert Yount, for whom Yountville is named. In 1847, Nathan Coombs founded the town of Napa, and in 1850 settlers were ranted deeds out of the original ranchos. Napa county went on to become one of the first recognized counties in the new state of California. Two names of note who gained fame in the 1800s, and whose descendants are of renown through the development of the wine industry, are Edward Turner Bale and Samuel Brannan. Bale built the Bale Grist Mill, and his daughter married famed winemaker Chales Krug in 1860, The dowry to that marriage became the first commercial winery in the Napa Valley. The grapes grown in Napa Valley include Cabernet Sauvignon, Chardonnay, Merlot, Zinfandel, and several others popular varieties. Through years of bad harvests, infestations of phlloxera, and even through Prohibition, Napa Valley survived to become a first-class wine producing community, and a tourist attraction in California preceded only by Disneyland.

The Carneros Region is a much smaller tract of land at the bottom of the Sonoma and Napa Valleys, and is comprised of parts of both. It is just north of the San Pablo Bay, and the closest part of Wine Country to the city of San Francisco. The Carneros region is drier and cooler than the Napa and Sonoma Valleys. The soil quality of the Carneros region is not as rich as that of the other areas, so the grapes there spend more time on the vine (hang time), producing a distinct flavor in the wine. These grapes usually go on to make pinot noir, chardonnay, and sparkling wine. The sparkling wine from the Carneros is world class, and is produced in the tradition French methode champenoise. The first vineyard was planted in the Carneros in the 1830s by Jacov Leese, and William H. Winter purchased a large tract of land to create the first commercial winery, Winter Wines. As with the other wineries in California, the onset of Prohibition and the phylloxera infestation (a root eating louse that caused large numbers of vines to die) put the Carneros region through a trial of strength. But Carneros survived, and grew to contribute a great deal to California’s immaculate wine reputation.

Wine Country is an area with a strong stubborn history. Vintners and growers defied the law and nature itself to lovingly persuade grapes to grow in these fertile climates. The people living there now are much the same, and so wine country has a distinct atmosphere of dignity, pride, and a great sense of fun. As much of a draw as wine is, there is just as much attraction to wine country because of its breathtaking beauty. Gorgeous weather combined with beautifully maintained vineyards inspires a sort of awe at the lifestyle lived in wine country. Deep Blue skies contrast with the gold mountains and deep green vines to paint a picture of California that is so beautiful it nearly hurts.

Take one of our Wine Country tours to learn more about wine-making and its history, or to enjoy a relaxing day with extremely breathtaking views as you indulge in fine wine tastings.

Sausalito is a small yet beautiful town at the other side of the Golden Gate Bridge from the city of San Francisco with only a population of 7,500 people.