The California Palace of the Legion of Honor

One of San Francisco's most eye-catching attractions is The Palace of the Legion of Honor which was gifted to the city of San Francisco by Alma de Bretteville Spreckels. Mrs. Spreckels fell in love with the 18th-century Palais de la Légion d'Honneur located in Paris and persuaded her husband, Adoph B. Spreckels, the sugar magnate, to build a replica at three-quarter-scale to be used as San Francisco's premiere art museum. The building of the museum was originally planned to begin in 1915 but World War I delayed the building until 1921.

The Palace of the Legion of Honor was completed in 1924 and opened its doors to the public on Armistice Day of that year. The setting for the museum, Lincoln Park, was chosen for its beautiful scenic views of the Golden Gate Bridge, Pacific Ocean and city. Mr. and Mrs. Spreckels built the museum with the idea of 'honoring the dead while serving the living' and the city of San Francisco accepted the donation of the Palace on behalf of the 3,600 soldiers who lost their lives on the battlefields of France during World War I. Mr. Spreckels addressed the Board of Park Commissions in 1920 by stating that it was the purpose of "my wife and myself to contribute to the beautification of our native city something not only beautiful in itself, but also something devoted to patriotic and useful ends: something which might be dedicated as a suitable memorial to our brave boys who gave their lives to their country in the Great War, and also lend itself, as a home of art and historical treasures, to promoting the education and culture of our citizens, and especially the rising and coming generations." 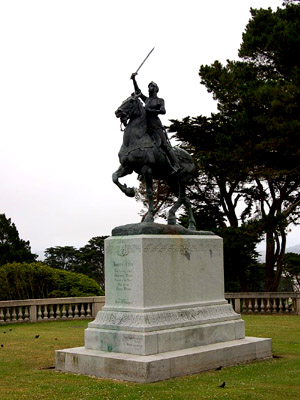 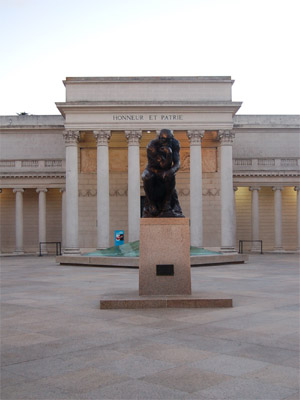 The original architect, George Applegarth, used innovative building techniques when constructing the museum including twenty-one inch thick walls, made with hollow tiles to keep temperatures even, and a heating system design that cleansed the air that filtered through it with atomizers to remove dust. The museum underwent a three year renovation and seismic retrofit from 1992 to 1995, which added a 42 percent increase in square footage including six new special exhibition galleries.

The Palace of the Legion of Honor features European decorative arts and paintings, ancient art, and one of the largest collections of prints and drawings in the country. Along with the plethora of European art, the Palace also houses a significant collection by Auguste Rodin covering all periods of his career, numbering over eighty pieces in plaster, terracotta, marble, and bronze. The museum's early collection including the Rodin pieces were organized and donated by Mrs. Spreckles who felt it was her responsibility in life to bring art within the reach of the public.

The Palace of the Legion of Honor is open to the public six days a week, Tuesday through Sunday from 9:30 am - 5:15 pm. Ticket prices range from $10.00 for adults and $6.00 for children over 12. For more information regarding the museum please visit www.famsf.org/legion.