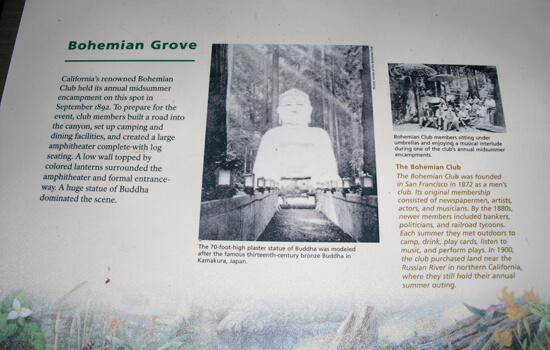 The Bohemian Grove is located in Monte Rio, California and consists of a 2,700 acre privately owned campground. Founding member Henry "Harry" Edwards was thrown a farewell party by about 100 Bohemians on July 29, 1878. This party was held in the Redwoods in Marin County near what is now Samuel P. Taylor State Park. The enthusiasm for this first encampment was so great that the Bohemians voted to hold an encampment each year. The Bohemian Grove was purchased by the Bohemian Club after the annual three week encampment was founded in 1878, as a permanent settlement for the yearly event. Melvin Cyrus Meeker sold the land that now hosts the Bohemian Club encampment to the club in 1899.

The Bohemian Grove is available for members interested in entertaining small groups of guests, although most guests are subject to a prescreening before admittance. Members are only allowed to bring spouses, friends and children to the grove during pre-scheduled day use events when there are no club events scheduled. During these day-use events women and minors are asked to vacate the property by 10:00 pm.

The facilities at Bohemian Grove consist mostly of entertainment areas including two large stages nestled in between Giant Redwood trees. Each year a play is performed as part of the 3 week encampment and both stages are equipped with lighting, sound and props. There are also sleeping quarters scattered throughout the grove as well as a club house overlooking the Russian River and a 1,500 person dining area. There is also an artificial lake in the middle of the grove which is used for informal talks and afternoon lectures. 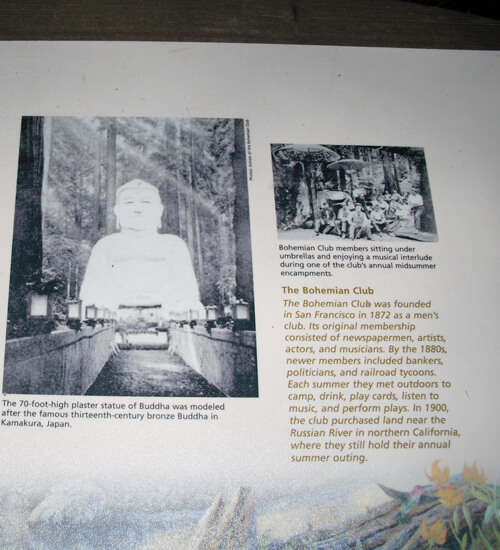