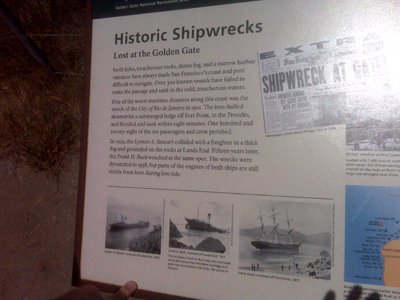 West of the Golden Gate Bridge in San Francisco is a rocky coast carved by extreme winds and waves known as Lands End. This coast connects two famous San Francisco landmarks; the Cliff House and the Palace of the Legion of Honor. Along with the famous landmarks that dot the coast are the shipwrecks which can be seen in the churning tidal waters below the cliffs.

Below Lands End, looking out over the water, a visitor can see three shipwrecks and the two treacherous outcroppings that lead to their demise. Both rock outcroppings, Point Lobos and Mile Rock, are camouflaged by the surf and are usually only partially visible. These rocks are responsible for many pierced hulls and damaged vessels along Lands End and are legendary among sailors.

In 1937, the freighter Ohioan struck Point Lobos one foggy night and the collision of the steel hull and rock was so powerful the crew reported seeing sparks. The Lyman Stewart and Frank Buck began their days together while being constructed, side by side, in the same shipyard and consequently ended their seafaring life on the same rock outcropping off of the Lands End coast. The Ohioan's stern post and boilers can be seen at low tide by taking the stairs down from the Merrie Way parking lot and looking out over the northwest vista point. The Lyman Stewart's triple expansion steam engine and the Frank Buck's stern post and steam engine can be seen while walking along the Coastal Trail between the Vista Point and the Palace of the Legion of Honor.